Since November I played and completed Mirror’s Edge: Catalyst, which was good, but it wasn’t the amazing experience I remember the original game being. I feel it side loaded a linear game into an open world style that it never needed.

I also played and beat Call of Duty: Black Ops. Oh what a mess that single player campaign was. I didn’t feel like I needed any skill to get through the levels. They were just a cavalcade of spectacle and little else. I never felt like my actions ever had an impact on anything that was going on. The game was setup in a way that with or without the player the levels were going to play out the same.

The last game I played was Borderland 2. If you played the first, as I did, then you were in for more of the same. I was hoping for more of a change in the game’s structure, but that was not to be. Any changes or additions made were minor and meaningless. I played it long enough to realize that doing everything was having it overstay its welcome. Eventually, I only did the story missions and skipped all optional ones (which were a ton). Even then it was too long when what I thought was going to be the final battle turned out to be a fake out. I was done at that point and that’s no fake out.

I’m not sure what I’ll be playing next, but I’m sure it’ll take longer than it otherwise would because that’s how I roll. :)

Unlike in 2014 when I had been given lots of movies on Blu-ray for Xmas, this year it was mostly video games. The similarity between this year and that year is they’re all from my wish list. Upon thinking about it, I’m surprised all the games are from this last calendar year. I’m ready to load my BFG to take down the demonic mafia all the while raiding more tombs. Praise the sun!

Remastering of last generation games — are they worth it? Free-to-play or Free-to-start — which is it? Also, we chat about Gamestop’s horrible recycling program, Nintendo going mobile, and Usagi704 purchases a Bloodborne PS4 faceplate…live! All this plus your feedback and more on episode 61 of the Hart & Usagi Podcast.

It’s now time for the big award. My Game of the Year award. Three games stood out to me, but only one takes the glory home.

The praise BioShock Infinite got around the time of its release was well deserved as it all worked well together and the game was fun to play. The sudden turn against it later in the year made little sense. It was just a bunch of sheep afraid to continue liking the game because somebody else had a problem with something minor in the story. Sure it’s not perfect, but no video game is in that department. Regardless I enjoyed my time with BioShock Infinite.

In October I played Dark Souls for my Halloween gaming event. It was a fantastic expansion of what From Software started on the PlayStation 3 with Demon’s Souls. I was a bit confused on how to build a good character and ended up sticking with mostly magic attacks as I did in the previous game. Gwyn went down to my Soul Spears.

The winner, as if you didn’t already know what game it was thanks to the above graphic, and my Game of the Year is Sleeping Dogs. This was a game I played in December and I love it. It was suggested by NiceGuyNeon who said he knew I’d love it. And that I did. This was one of those middle-of-the-road titles, as I like to call them, where the production values may not be the greatest in all areas like a Grand Theft Auto game, but it does do things wonderfully where it needs to. A highly recommended game for those looking for a kung-fu fun time!

Thanks for reading my awards posts and if you missed any you can check them out under the “goty2013” tag.

Have a good one!

The Hart & Usagi Podcast episode 39 brings you a lively discussion on the issue of a distributor blacklisting Indian gaming website Illgaming, story vs. gameplay, progress in Dark Souls, among other topics. Please join HartKnight (me), usagi704, and our guest lightnarcissus as we get to the bottom of Ludo Discobiscuits.

A recent sale on used games at eStarland where you get $10 off of $40 or more gave me an incentive to tackle my wish list and get some games off of it. I did so with the Nintendo DS titles Power Rangers: Super Legends and Space Invaders Extreme 2 along with Castle Shikigami III for Wii.

Locally I also bought Power Rangers Samurai on DS and a new copy of Borderlands 2. I wouldn’t have bought Borderlands 2 already, but I had a lame Sprint rebate card to use up. Next time send a check.

Move over BD because here comes DVD and it brings a third helping of Angelina Jolie in Tomb Raider: The Cradle of Life. I also picked up Jackie Chan: 3 Film Collection for the purpose of wanting to see Project A. It was quite the entertaining film and as a bonus I also get Project A2 and Dragon Lord. All three movies have Jackie Chan playing the character of Dragon and were all directed by him. 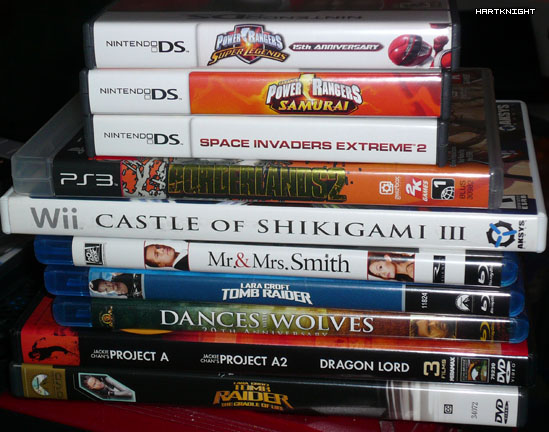 Welcome one and all to a new episode of the Hart and Usagi Podcast. This is episode 31 and I, along with returning guests SonicHomeboy and lightnarcissus, talk about our experiences playing BioShock Infinite.

We do reveal things you might not want to know about if you haven’t played the game to the finish. However, if you’re still interested in what we have to say, then I suggest downloading this episode and saving it until you complete the game. This way you won’t miss out on our thoughts.

Sorry about the audio quality during part of the show.