The following stats are for all of my video game purchases throughout 2016.

I also bought myself one last game in the final week of 2016 which is included in the stats above. It’s Nastume’s Wild Guns Reloaded! 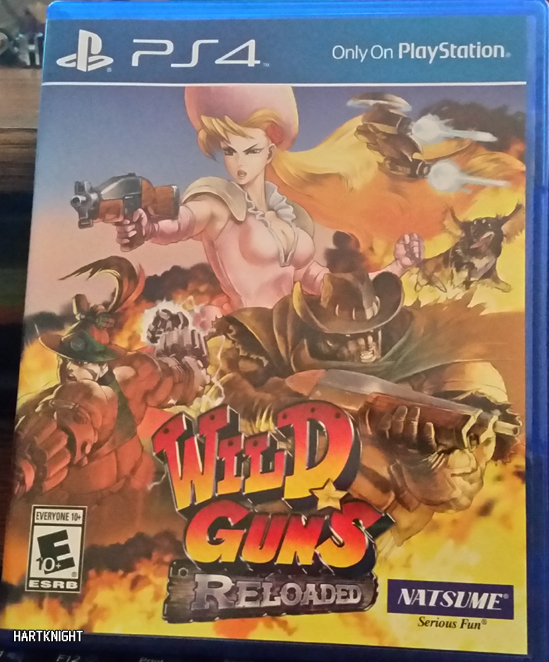 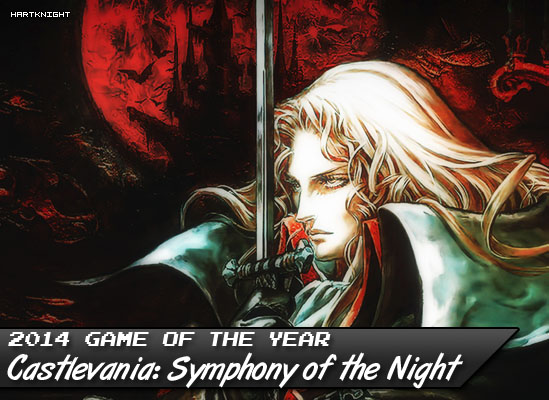 I had a lot of fun throughout 2014, but the five games which stuck with me the most was Wild Guns, Castlevania: Symphony of the Night, Hotline Miami, Ratchet: Deadlocked, and Yakuza 3.

Natsume’s Wild Guns is a great game in the style of Cabal and Nam-1975. However, where those games were more plain, Wild Guns kicks up the action a notch with a meter that builds when enemy bullets are shot. Once full your character pulls out the Vulcan gun and is invincible. Is a great reward for such a risk taking measure to get there.

I’d already talked about Hotline Miami in my 2014 Biggest Surprise award, which it won, so check that out.

Ratchet: Deadlocked was the first of three Ratchet & Clank games I played last November and it was more fun than it was for me back in 2010. It had less mini-games to bother with and boxes to smash for bolts which I found to be a good thing. It made for a much more focused adventure. One for which I appreciated.

I love me some beat-’em-ups and, as usual, Yakuza 3 delivered. And while I feel it deserved a spot on this list of nominees for my Game of the Year, there was just too much of finding things for and tending to the kids in the game made it more tedious than I’d had liked. Still the combat portion of the game, once you get to them, is great as always.

Finally, Castlevania: Symphony of the Night, a game I played for the first time in 2014, earned its way into my top three Castlevania games of the series. This is the conclusion I came to on episode 52 of the Hart & Usagi Podcast. Also, as you can see by the image at the top of this awards post, SotN has also earned my top award for 2014. At the time in 1997 it was a brand new experience for series veterans, but the game also remembered where it came from with nods to past titles like Simon’s Quest and Dracula’s Cruse. Just as I said then after playing it I say it now: Castlevania: Symphony of the Night is rightfully an all-time classic.

Thanks for reading and make sure to check out the rest of my awards if you haven’t done so already. 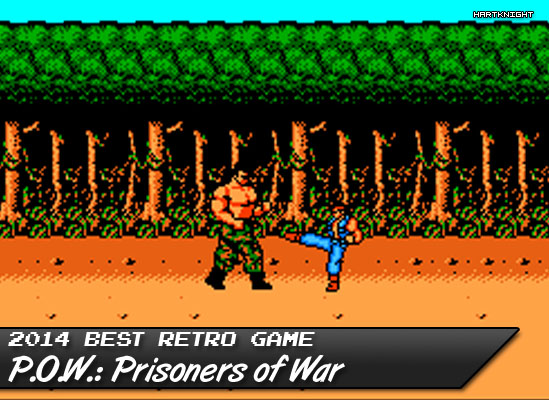 Welcome back to my 2014 Games of the Year awards!

This time I’ll be choosing my favorite of the retro games I played this year. This is mainly from the month of March where I went back to my gaming roots with several titles spanning across the Super Nintendo, original NES, Game Boy, and Genesis gaming consoles. These games consist of those I’ve played or haven’t played in the past, but the common trait among them is that I never seriously tried to finish them before. However, in 2014 I did beat most of them.

I quite liked my time with Natsume’s Wild Guns and Jaleco’s Operation Logic Bomb, both on SNES, but, I don’t see myself going back much to them. Capcom’s NES Rolling Thunder clone called Code Name: Viper was excellent. I’d even consider it better than the game which inspired them. Once I got the hang of how to approach enemies in Super Double Dragon, it became a favorite of mine within the Technos beat-’em-up series.

The one that really brought me back many times, however, was P.O.W.: Prisoners of War. This SNK brawler wasn’t that great in the arcades, but once it came home it was best on NES. Once I watched a speed run of the game with commentary, it gave me the tips I needed to beat the game for the first time. And a second time…and a third time. I enjoyed it much more than I thought I would given I didn’t remember liking it all that much back in the early ’90s when my family rented it. I’ll admit that the 21 life code didn’t hurt the experience either.

Do you have a classic game you love going back to that you recently discovered within the previous year? Let me know in the comments section below. Also don’t forget to like and share this blog post if you enjoyed it.

March proved to be the best month for beating games with 16 in total thanks to getting back to my gaming roots. The monthly average throughout the year was 3.8.

Volume number eight is here of video game music that’s pleasing to my ears. Check them out below and see if you agree. Also check out the crazy and informative podcasts at the bottom if you haven’t already.

SPACE SUPLEX #6 – June 21st 2014 (@SpaceSuplex)
24bitAJE and HartKnight review the June 16th RAW and talk about our current thoughts of the (upcoming) Money In The Bank PPV.
https://hartarchive.wordpress.com/2014/06/21/space-suplex-podcast-ep-6-stardust/

Starting out this month of April was a continuation of my gaming roots. I played seven games and of them six where kick ass. You can read the details of those games here.

I also played the one Super Nintendo game I own on the Virtual Console. It was the tough, but never upsetting or rage inducing, Wild Guns. The details are available here and included is the episode of the Happy Video Game Nerd which introduced me to the amazing game.

The final game I played from the old days of gaming was Ninja Warriors. It’s also on the SNES and I’ve finished it previously, but I didn’t do so on Hard difficulty. I used Kamaitachi through most of the game, but I had trouble throwing enemies into the final boss to damage him. This is where Ninja (yes, that’s the character’s name) came in perfectly. His throws are have a bit more of an arc to them than Kamaitachi’s does. This helped a lot and one attempt was all I needed for Ninja to win the day.

I haven’t played any of the more modern games of today since getting annoyed with Onimusha: Dawn of Dreams in early March. It was a month and a half of glory and reminded me of the past which helped out a lot. Well now I’m back as of two weeks ago and my first game back was Assassin’s Creed: Brotherhood.

I’ve played the previous two games in the series. My favorite has been Assassin’s Creed II (AC & ACII thoughts). Overall, I think I may still feel that way when Brotherhood is all said and done. I’ve been used to seeing a Viewpoint on the map and being able to climb it and synchronize. In this game you have to kill a specific captain beforehand at some of the Viewpoint sites. This isn’t a problem, of course. My problem is seeing them on my map and not being able to reach them. It’s been awhile since I’ve been able to open up more of the city.

When I was playing ACII I was surprised of the many, many ways to deal death to opponents. Brotherhood brings all of those abilities back, upgrades a few of them, and then adds even more options to your arsenal. Previously, for example, your options for distance kills were throwing knives and a arm-mounted pistol. Now you have those returning along with a crossbow, poison shots, and eventually the ability to call in fellow assassins.

Somewhat annoying as portions of the game might be I still am enjoying my time with Brotherhood.

This past week I played the only Super Nintendo game that I wanted bad enough, but it was too expensive to get the cartridge for. This was Natsume’s very underrated 16-bit classic Wild Guns.

I played the game via the Virtual Console. I did take advantage of the automatic single save state the old Wii console creates when exiting back to the Wii menu. It may sound like a cheat, but it’s really no different than leaving an SNES system on and I wouldn’t want to do that to my original SNES.

Wild Guns has unlimited continues, but only three lives to get through a stage. The Ammunition Depot and Gold Mine (stages 3 and 4) probably took me the longest to get through. Which one was the shortest? You’re likely thinking it was stage 1, Carson City. Actually the least amount of tries to complete was the last stage (number 6, Final Fight). I think it took only three tries where as something like stage 5, Armored Train, was probably about 15-20 continues.

If you’re not familiar with Wild Guns just think of TAD Corporations’ Cabal (1988) and SNK’s Nam-1975 (1990) of the arcades. Wild Guns (1995) builds on these previous titles with some interesting game mechanics. There’s a jump and double jump available when not shooting. A jumping roll happens while shooting to quickly dodge out of the way. A few times you’ll need to use a melee attack on very close enemies by pressing the shoot button. If you keep tapping the same button a lasso will come out and if it hits an enemy they’ll be stunned for a short period of time. A separate button is a screen clearing bomb. Several extra weapons like a machine gun, shotgun, etc. can be acquired via item pickups. The very powerful Vulcan gun is available once a bar is filled and lasts until it’s empty. How do you get it? You have to shoot bullets heading your way.

What does all of this add up to? I’ll tell you. It adds up to a really fun game that’s tough, but fair. It’s also not frustrating at all. This is a hallmark, in my mind, of what a great game is.