In episode 98 we welcome Steve back to the show and chat about Joe Biden’s out-of-touch Jack Thompson video game arguments, M2’s plan for the whole Toaplan gaming library, how Steve couldn’t ever get into the classic Resident Evil and Devil May Cry games, plus more. 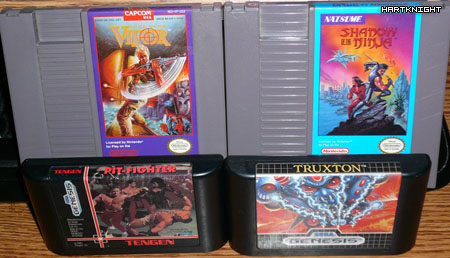 Another set of games acquired over the last week. I’ll get the downer part of this news out of the way at the top.

As you know from my review (online archive) of the Stickman’s Ashland, Ohio location, it’s pretty bad in about every possible way. When I was there a week ago last Friday I bought Truxton. It’s a fairly difficult to find shoot-’em-up for the Genesis. It cost me $12 for the game only which is about what it is. The guy at the store claimed it goes for $50-70 complete. I looked that up after I got back and found out the real deal. A complete copy of Truxton only goes for $20.

The fun doesn’t stop there. It wasn’t until late Saturday night I noticed online that I was charged $21 for the game. Since they’re closed on Mondays for some reason, I had to wait until Tuesday to return to get my money back. As it turns out they’re so cheap that they called the other crappy location in Shelby, Ohio to charge my card. Luckily I was able to get the difference back in cash so I wouldn’t have to go through that again. Bottom line: They sell crap and I ain’t going back.

I’m happy to say there’s a good thing I can say about Stickman’s. It’s in the form of another location in Galion, Ohio. Of course I expected it to be crap, but apparently the third time is still a freaking charm. This location isn’t owned by the same person as the other two locations and it shows. Everything you’d expect from such a store was being done at this location. The place was clean and didn’t smell bad, the prices were reasonable, and the games were cleaned and tested. I’ll gladly go back to this place in the future after getting Code Name: Viper, a second better looking copy of Shadow of the Ninja, and the Genesis version of Pit-Fighter. It probably helped that the owner was a woman.

From Glyde.com my order with Urban Reign came in. It was an excellent complete copy at only $3.25 and it’s not the easiest to find.

And finally my winning eBay auction of the Game Boy version of Samurai Shodown arrived today. It’s probably more rare than any of the other games listed in this blog entry yet I was able to get it for a mere 99 cents.

Here’s how it works. I’ll list the nominees (up to 5) and then choose the game of the year and runner-up. The games chosen have to be games that I’ve played. They don’t have to have been played at the time, but they do have to be within the year noted in the title.

1986 Game of the Year: Ikari Warriors
Runner-up: Out Run

Coming off of the 1985 film Rambo: First Blood Part II, it should come to nobody’s surprise that a number of video games were made for the arcades that were very loosely based off of the movie. Ikari Warriors was great in this respect and also had the ability for simultaneous play for two players along with the rotary joysticks. I didn’t play it much, but it was fun when I did.

Out Run was available in a number of arcades so I was able to play it a lot more. This game was less of a racer and more of a driving game. It’s definitely one of the more memorable Sega games outside of Sonic. Victory Run (TG-16) is very much in the same style with the addition of the ability to upgrade the car.