In episode 99 we chat about Atari themed hotels, Google waving the white flag for Stadia, Reggie joins GameStop, plus more.

TOPICS:
* Mortal Kombat Kollection Online rated for PS4, Xbox One, Switch, and PC in Europe
* SNK Brings Garou: Mark of the Wolves Into the Modern Era With Rollback Netcode
* Housemarque puts battle royale shooter on hold, shifts focus to “biggest and most ambitious title yet”
* Atari teams up with the producer of the Teenage Mutant Ninja Turtles reboot to make gaming-themed hotels
* EVO 2020 title lineup announced
* Double Dragon & Kunio-kun Retro Brawler Bundle coming west for PS4 and Switch on February 20
* Lara Croft in Rainbow Six Siege looks like your mum doing bad cosplay
* Google Stadia doesn’t have many games because it isn’t offering devs enough money
* Google Says Upcoming Stadia Game Announcements “Are Up to the Publishers”
* Antonio Banderas confirmed for Uncharted movie
* Bloodstained Won’t Be Getting a Roguelike Mode After All
* Reggie Fils-Aimé joins GameStop Board of Directors

On episode 89 of the Hart & Usagi Podcast we chat about a variety of topics like Telltale breaking labor laws, breaking and entering to play the NES, and more.

TOPICS:
* Only ’80s Kids Remember: Breaking Into Houses to Get an NES Fix
* Sony Says It Has Fixed the PlayStation 4 Message Bug That’s Been Causing Consoles to Crash
* Red Dead Redemption 2’s 100-Hour Weeks Are Nothing New for Rockstar
* Street Fighter V: Arcade Edition update will improve the speed of the game’s inputs
* Castlevania: Symphony of the Night On PS4 Won’t Have The Iconic “What Is A Man?” Scene
* Telltale hit with class-action lawsuit for breaking labor laws
* PS Vita Production in Japan Will End in 2019, No Successor Planned
* Capcom Beat ‘Em Up Bundle Smashes its Way to PlayStation 4
* The PlayStation Classic is Going to Have a Much Harder Time Selling its Nostalgia Next to the SNES Classic

On this episode of the Hart & Usagi Podcast we chat mainly about the game announcements from E3 2015 among a few other things. Join us.

This is a special episode of the Hart & Usagi Podcast. We welcome back ebbderelict. Our main discussion will be about first-person shooters. However, beforehand we discuss some news.

Enjoy the show and remember to subscribe via RSS or iTunes and follow the Hart & Usagi Podcast today!

NEWS/TOPICS:
* Top 5 Most Violent Games of 2014, According to Consumer Reports
* Hackers Ruin Christmas for Xbox and PlayStation Users
* CISPA To Be Reintroduced in The House This Week
* ESRB Gives Hatred An Adults Only Rating
* Hotline Miami 2 Designer To Australian Gamer: Just Pirate It
* USgamer Community Question: What’s Your Most Anticipated Game of 2015?
* First-person shooters discussion

This week’s edition of Complete In Box Fridays will focus on one of the many video games which beared the Tom Clancy name. Reason being, if you haven’t already heard, the man himself passed away at age 66.

Now I was never a fan of Mr. Clancy’s books mainly because I simply didn’t read them. I became familiar with his work through the video games based on the fictional universe of his novels. And, in the 1990s, I did see the occasional film like The Hunt for Red October or Clear and Present Danger starring Sean Connery and Harrison Ford, respectively, but I wasn’t aware it was based on his writing.

The first game I played with Clancy’s name attached was Rainbow Six on the original PlayStation. It wasn’t very good at all as history has shown. I also tried, and while considered a good game, I just couldn’t get into the first Splinter Cell on PS2. This is why I was surprised I enjoyed Rainbow Six Vegas on the current generation of systems as well as I did. The squad based gameplay is usually not my thing. Take Freedom Force, despite being highly rated, as an example of disliking a game because of how it handled its squads. It was fun even though I ended up unable to complete the game near the end because of some glitch which didn’t allow for the boss to react as programmed.

Regardless of the version you get a complete copy of Tom Clancy’s Rainbow Six Vegas is extremely cheap ranging from $3.40 on PSP to $6.25 on PS3 with the Xbox 360 somewhere in the middle.

Thanks for reading and before you go, check out the photo below by clicking on it. You can get more CIB Fridays articles by looking through its category.

In the next three weeks my current, ongoing 4th annual Halloween Gaming Event will include CIB Fridays. Be on the lookout for some horror themed games! Have a great Friday! 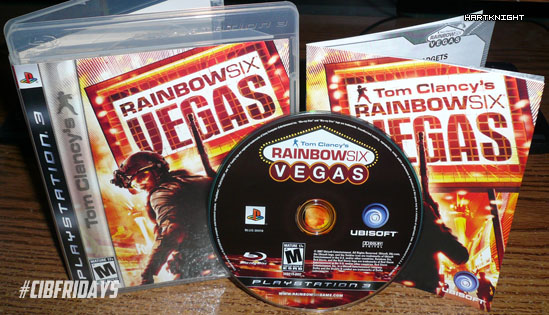 A recent sale at eStarland was giving 20% off used games. I looked for a number of titles I’ve had on my wish list for awhile and didn’t expect to find anything. Usually I find they aren’t in stock or are still a bit too much even after the discount.

It was nice to see that it was worth it this time. On top of that I also got free shipping. I bought two PS3 and two Wii games.

I was also trying to find Midway Arcade Origins locally yesterday as a way to celebrate the absolute crushing defeat the GOP received in Tuesday’s election.

Since it was going to be a new copy I didn’t mind going to Gamestop. They don’t make much of anything on new games. Well, they said they didn’t have it in when I asked about it. This is a possibility, but a more likely scenario was that they did have what I wanted. The reason being that I said the title wrong…twice. First I said “Mortal Kombat Arcade Classics” and then I said “Midway Arcade Classics.” Neither exist and I didn’t catch that I said “Classics” instead of “Origins” either time. Time to play the Price Is Right losing horn. 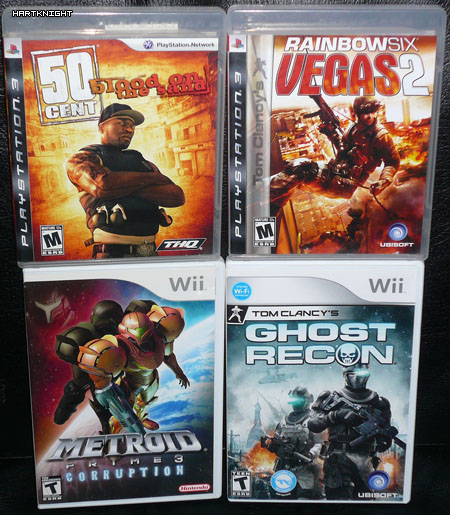 The following list is the ten games on my wish list that have the highest amount of total GameSpot members that have also placed these games on their wish list.

This month was unexpectedly worse in quality gaming than I expected. While I did enjoy my time with Alien Crush, Peggle, Tekken 6 on PSP, Super SFII Turbo HD Remix and a few others, some game just got on my nerves.

NBA Jam was the first to be a lot of fun and then it turned into a travesty when I tried to play half-court matches in Remix mode. It’s also very hard to tell your distance vs. an opponent to make a block. The CPU players don’t help things by being merciless even on Easy. Thankfully the original mode is still fantastic after all of these years!

Of course the biggest problem of all was Army of Two. I kept on calling it dumb via my updates on Twitter. When I looked at reviews for this game from ’08, I couldn’t believe how many were giving it fairly good passing marks. I didn’t play a 8 out of 10 game. Nowhere near it. They all claimed that the AI partner is horrible, but that this was made up for by having a friend play along with you. It’s not. Stay away from this 3 out of 10 BrickBeef McDudeShooter*.

Half-Life 2: Episode One and Tom Clancy’s Rainbow Six Vegas were the best of the bunch for this last month. The latter I had to consider finished when it didn’t let me continue on with the last two objectives by always saying I failed. I know I was playing the mission in question correctly when I checked out gameplay on YouTube.

The former, Half-Life 2: Episode One, was the great gameplay I liked from HL2 in bite size. This game I actually was able to finish. Being away from this style of game for as long as I have made it feel a little old in how it played. By this I mean I’m used to recharging health, clearly marked objectives, and a very linear path. I’m okay with this since it’s Half-Life after all. It was a fun experience, but, as I’ve read many times, I’m very likely to enjoy Episode Two much more.

In closing, I finished six games this month giving me 24 total for 2011. It’s probably the most in a long time. Listed below are those games and dates. Thanks for checking my blog out!

Ten days ago I started and seven days ago I finished Half-Life 2: Episode One. It was a decent few hours, but nothing spectacular. There’s not a whole lot to say about it other than if you liked Half-Life 2, then this is more of that except in fun size.

One thing that was surprising to me was how little it holds your hand. All shooters today string you along and make sure you don’t get lost and know what to do. It took some getting used to this again and it why my death count was at 25 by the end.

For my current game I went back to Tom Clancy’s Rainbow Six Vegas. I started it in May of 2008, but moved on to other titles soon after. Back then I was thinking of getting the sequel, but I decided against it since I hadn’t played much of the one I had. I think I’m nearing the end and it’s giving me the same feeling that Sly 2: Band of Thieves did. In that while I’m enjoying what I’ve been playing so far, this will be all I’ll need to be satisfied.

The later parts of the game have become more trial and error. There’s just some of the situations you get into, like ambushes, that you can’t possibly know about ahead of time so you end up getting killed quickly. Once you know how it plays out you can retry with an actual plan.

Here’s a quick list of games that I most recently bought.