In episode 98 we welcome Steve back to the show and chat about Joe Biden’s out-of-touch Jack Thompson video game arguments, M2’s plan for the whole Toaplan gaming library, how Steve couldn’t ever get into the classic Resident Evil and Devil May Cry games, plus more.

In episode 97 we chat about Street Fighter V: Champion Edition, Google Stadia reviews, best 50 games of this decade, and more.

Lightwarrior179’s first time on the Hart & Usagi Podcast was fun talking about mainly the Mass Effect 3 debacle (#13). Episode 15 was a post-E3 show. Madtyger was a welcomed guest for the first time in our post-PAX show (#18). The most fun, however, was the jumbo 19th episode with SonicHomeboy and midway through a call to madtyger.

BEST PODCAST NOT MY OWN
Giant Bombcast
The Jimmy Dore Show
MLW
WINNER: No More Whoppers

All of these podcasts are fantastic for different reasons. The Giant Bombcast for gaming, The Jimmmy Dore Show for a comedians take on politics, and MLW for pro wrestling talk featuring former WCW talent Konnan. No More Whoppers is the winner for being a consistently entertaining mix of gaming and life in Japan. It’s fun stuff!

Madtyger runs a gaming clan (GPY) which I’ve played with on several occasions. I won several of these events. Most notably Mortal Kombat Arcade Kollection and Crash Commando. I ultimately had more fun playing Call of Duty 4 and that was after Usagi704 couldn’t join us because his PS3 rejected the online portion of the game. It was fun to get owned by madtyger. 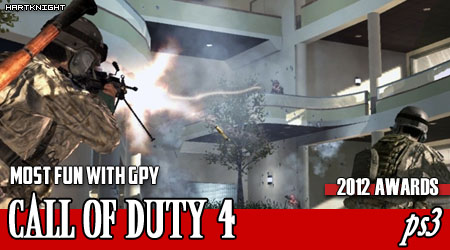 Thanks to all of the responses from everyone in early 2012, I played a number of games I owned but hadn’t yet started. Of all of them these were the four I enjoyed the most with my lone platinum trophy gained in the last calendar belonging to the most fun of these being Assassin’s Creed II. I also have to give props to Deus Ex: The Conspiracy. It gave me a lot to think and talk about during the time I played it.

In a similar fashion to the award above I asked which of the games on my Backloggery mastered list I should revisit. All are great fun and were so once again, but, man, if I don’t love Castlevania: Aria of Sorrow and its copious amounts of replay value.

I don’t consider myself big into platformers, but that might have more to do with the downplay of them in today’s gaming environment. Regardless, I do love the greats and Klonoa: Door to Phantomile is certainly one of those.

Last year’s winner was Run Saber. It easily took the crown, but this is a bit of a closer race in that I didn’t expect to be surprised by as many this time. Lost Planet was more exciting than I thought, Tony Hawk’s Pro Skater 2 went better once I seriously tried to play it, and Beyond Oasis was less confusing than it seemed initially. If anything Deus Ex: The Conspiracy was thought provoking enough to inspire four blog posts my yours truly. It also had several ways to tackle most missions making for a unique experience (one I didn’t feel was hampered by being on the PS2).

A great open world game, platformer, shooter, and action game. All I’d highly recommend with Devil May Cry being at the top. I put this game off as being not for me for a long time. But when seeing it again with fresh eyes and via the HD collection, I had to give it a shot. It didn’t disappoint and I now see why it was and still is highly influential and considered a classic in the truest sense. 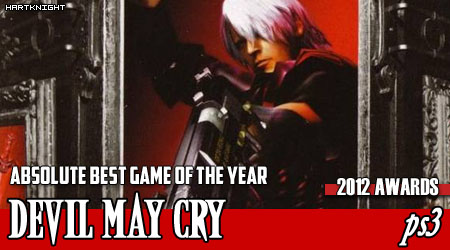 The Hart & Usagi Podcast is back with episode 19 and on the show we cover news on the Wii U among many other topics. We welcome SonicHomeboy back and part way during the show madtyger calls in!

With this last weekend being the big fighting game tournament EVO 2012, Usagi and I discuss it along with other topics. One of those topics, namely Mass Effect 3, is brought to the table by first-time guest 6h05tly! Get ready for some fisticuffs on episode 16 of the Hart & Usagi Podcast!