Episode 79 of the Hart & Usagi Podcast is here! We chat about a variety of topics like the Scalebound cancellation, our playthrough of Shadow of the Colossus, quality of Nintendo’s Virtual Console service over the years, and more.

From the popular to the strange to the unknown, he’s another list of my favorite video game music!

November proved to be the best month for beating games with 8 in total thanks to TMNT Month with a monthly average of 3.

When it comes to earning those fancy trophies, I was able to earn 226 last year.

During September I played only three games, but they are quite lengthy if you let them be.

Marvel Ultimate Alliance was finished at the beginning of the month to where I started Dragon’s Crown right after. You can read about MUA here.

On Dragon’s Crown I had a fairly good time with it. However, as I said last week, I had trouble with the last three bosses. My Amazon character was not properly leveled up in the skills department and therefore I could not defeat them before being forced to next the level. Thankfully I had backup in the form of Usagi704 and RivalShadeX to help me out with their badass elf and wizard, respectively.

With their help I was able to move onto what I had planned to play for a year. Why a year in advance? Because it is for my 4th annual Halloween gaming event, of course. The game? Dark Souls!

Just as I did with Demon’s Souls two years ago, I am using the Dark Souls Wikidot Wiki since the game does not always explain things very well.

This time my beginning class is the Knight. Not for namesake reasons (though that is nice enough), but it was the overwhelming choice of the Internet Zeitgeist that it is the best class for beginners.

It did me well up until I faced off against the boss of Lower Undead Burg, the Capra Demon. With the help of two dogs I was killed six times before I was reminded by Usagi704 that “fat rolling” was mainly what was getting me killed. Once I lightened the load of my armor and was able to more swiftly roll about, I was victorious. I was also very lucky on my sixth attempt to get the two dogs out of the way quickly. After that I simply lured the Capra Demon up the stairs multiple times and had him jump off for a long recovery time.

Overall it has been going quite well for me. How’s your gaming life been (trick or) treating you lately?

Thanks for reading and have a good upcoming Halloween season!

What does the 2006 game Marvel Ultimate Alliance have in common with this year’s release of Dragon’s Crown? Do you have a guess? No, it’s not that I am or that I have played these two games despite being true. It’s that they both allow for simultaneous four-player brawling action.

The game I finished a week and a half ago was Marvel Ultimate Alliance. The last time I checked in with you about it I was 15.5 hours into the game near the end. After all was finished with MUA, I clocked in just under 20 hours and for most of the latter part of the game I stuck with the team of Captain America, Mr. Fantastic, Thing, and Wolverine. The Dhalsim punches of Mr. Fantastic were particularly helpful. I was also happy that my AI controlled allies who were usually on-the-ball with attacking my foes. Marvel Ultimate Alliance is my 22nd game finished for this calendar year.

As for Dragon’s Crown, I started it on the same day I was done with MUA. Since then I’ve put in 11 hours and 23 minutes into this absolutely beautiful looking beat-’em-up by Vanillaware. I chose to play as the Amazon and named her “BigAxe” because, you know, she has a big…axe. My dying message is “Where’s Xena when I need her?”

Finally two purchases I made at Best Buy yesterday was for Crysis 3 and Teenage Mutant Ninja Turtles (1987; Season 3). Crysis 3 was surprisingly just $15 and the season of TMNT ’87 was $10 for all 47 episodes (with no frills, of course).

When it comes to the TV shows over the years of the Teenage Mutant Ninja Turtles, I don’t enjoy the 1987 series as much as I used to. Sure I did while growing up. I mean, who didn’t? But it just doesn’t work for me these days especially since we now have the 2003 and 2012 series. I prefer the two more recent outings more, but just like with a season or two of Transformers and G.I. Joe, I don’t mind owning a season of the ’87 TMNT show. It was a big part of my childhood after all. 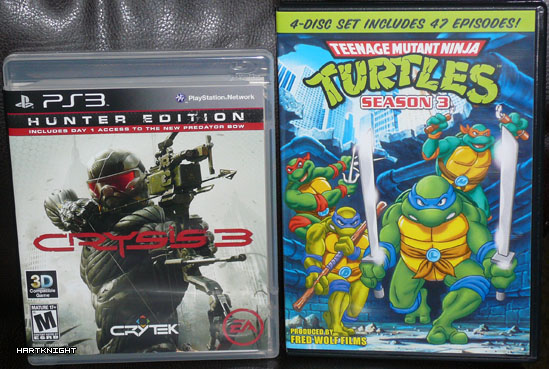 In the past month I had mentioned I was going to play the games I had which were listed under the Giant Bomb profile of the great Ryan Davis. As such I played Super Mario Bros. 3 via Super Mario All-Stars. My progress halted at World 8, sadly. I did, however, get to almost completing my currently played game, Marvel Ultimate Alliance. I think I’m on the last set of missions headquartered in Attilan and I should be finished soon at 15 hours and 28 minutes of game time up until now.

Speaking of finished games, I did that with three titles this month.

First up was Streets of Rage 2. I played a solid hour with the gentleman known as Jason_X on Backloggery. I chose Axel as usual because that character just kicks all kinds of ass. Jason chose Blaze. This is a character I usually stay away from. The damage output for her is weak and her double tap forward plus attack doesn’t make for a very good game, but as a team we put a whipping on Mr. X.

The second game to be finished two days later was Tomb Raider: Underworld. I’d talked about what I liked about the game in July’s Now Playing and my final stats were 25 out of 33 trophies, 143 out of 179 total treasures, and 11 hours and 12 minutes of game time.

And last, but certainly not least is Dragon Warrior. It was finished a week ago via the Game Boy Color compilation Dragon Warrior I & II. My final character level was 28.

It was a good thing I looked up an FAQ on what key items to collect. I didn’t remember the placement of the game’s best armor nor did I remember how to obtain the Rainbow Drop to form the bridge to the Dragon Lord’s castle from by childhood of playing the NES version of this game. Regardless, I still had a wonderful time revisiting this rebalanced RPG classic.

Thanks for reading and have a good one! :)