Today’s video game industry doesn’t care much for the modest budgeted titles of just the last generation. The focus is always on the gimmicky no-budget or the all sizzle no steak of the million dollar titles.

What I’m going to focus on here is my favorite eighteen mid-tier games I’ve played. These will be listed without description, but they will have reviews linked for more information. These aren’t usually the best rated games, but if you go in being forgiving of some of the faults you’ll no doubt find, then you may just realize you’re enjoying yourself. But who am I kidding. It’s not like we’d want that to happen. Let’s get to it.

August, September, and December proved to be the best months for beating games with 6 in total for each with a monthly average of 4.25.

When it comes to earning those fancy trophies, I was able to earn 207 last year. One of them was a platinum from Assassin’s Creed II in April. 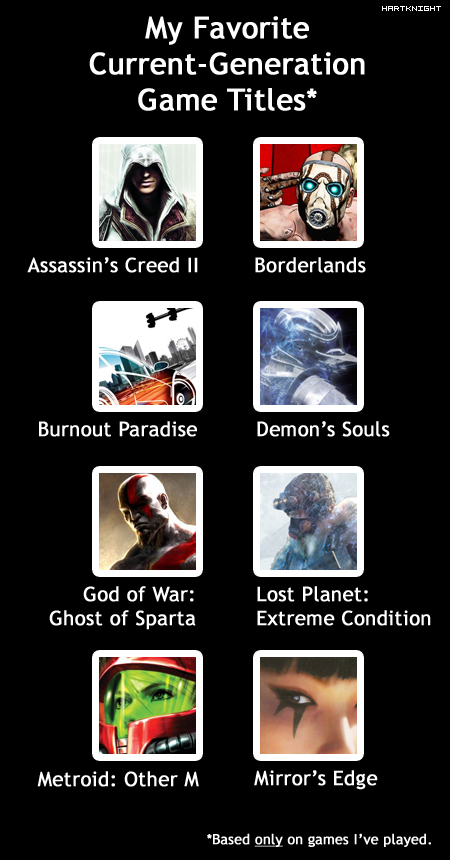 *Based only on games I’ve played.

This month’s Now Playing consists of five games. Let’s get to them.

Upon going back and seeing what I wrote during the month, I only did this one blog post. In it I mentioned my improvement of my times in Survival and Time Attack of Super Street Fighter II: Turbo Revival. I did a get a few times even better. Allow me to list them now.

In other arcade style action I played Super Hang-On and Alien Crush doing fairly well for myself as you can read about in the previous post linked above.

One game I forgot to update you on was Yakuza 2. I ended up finishing it on the first day of this month with 20 hours and 19 minutes of game time.

The game overall felt too easy and this was probably because I chose Easy to begin with. I was afraid of the fights against bosses since I remember having such a frustrating time with them in the first game. I also was a bit disappointed in the story itself. It didn’t pull me in as the first game’s did. This doesn’t mean you should stay away from this sequel since it’s definitely a step up from the previous entry. I think I just hyped myself up too much for it. All in all, it’s still a great brawler.

Another fantastic game I finally got around to playing was Lost Planet: Extreme Condition. Last time in the blog post linked to above, I mentioned my problem with the difficulty spike on the Mission 6 boss. Once I passed it the game settled down and got back to the business of fun.

One thing I really liked about this game was how more slower paced it was versus all of the Western style shooters. It’s definitely not afraid to say “Hey, I’m an Eastern shooter.” I hate it when Japanese developers try to make a Western style game like with Quantum Theory. Stick to what you’re good at.

My total game time was 7 hours and 35 minutes. I also played some multiplayer against Usagi704 and hope to play some more against Madtyger and her crew soon. I’m relying on them since nobody’s playing Lost Planet online anymore.

Thanks for reading, folks! Have a good one!

Hey there everybody! I haven’t posted about my gaming exploits in almost three weeks. It’s time to get on that.

The last time we talked I had listed what my best times were in Super Street Fighter II: Turbo Revival on the GBA in Survival and Time Attack modes. I improved a few of them and shall list them below.

During this past week I purchased the arcade version of Super Hang-On on PSN. You can set scores in the original arcade mode or set times on a leaderboard in the Trials mode. The latter I’ve been playing a bit to best Usagi704. At first I did, but he’s since improved on a couple of the tracks. My current times set are as follows.

On Sunday I played some of Alien Crush and managed to set a second place score on the PS3 scoreboard of 65,040,600.

The main game I’m playing at the moment is Lost Planet: Extreme Condition. I’m currently at the Green Eye boss fight of Mission 6 with three hours logged so far. Up until now it’s been quite fun despite the deliberately paced combat. I say “up until now” because I’ve tried to pass the fight with Green Eye several times to no avail. It was really frustrating to a point where I had to stop playing and get my mind on something else (like writing this blog post).

In Lost Planet your, what the game calls, T-Eng drains over time. When you take damage this energy drains faster to automatically heal you. If it runs out then you will simply have less than full health when hit. Getting more isn’t usually a problem.

When in this fight with Green Eye this mech (called a VS) you’re in drains T-Eng much faster when using its abilities like hovering and dashing. This shouldn’t be a problem, but becomes one when the rules are changed. If T-Eng hits zero the game automatically ejects you from the VS and you die.

This isn’t consistent with any previous time my T-Eng displayed zeros on the HUD. It effectively makes my T-Eng equal to health, but isn’t not like the VS I’m in for this boss fight doesn’t have its own health meter because it does. You can now probably see why I was highly annoyed at this game.

LP1 still a fun experience outside of this buzz kill.

Until next time game on!

A number of games jump out at me for the next fortnight. Castlevania: Lords of Shadow looks decent as does Enslaved: Odyssey to the West a bit more.

Medal of Honor has been on my radar ever since the announcement at E3 of the remake of Frontline included at no extra cost.

I may finally get around to playing Devil Kings on PS2 with the release of Sengoku Basara: Samurai Heroes.