The highest month was January with three games finished. The monthly average throughout the year was 1.08.

Four months ago Usagi704 and I had visited this out of town gaming store called Warp Zone. Once again we had made a trip down to this place where I picked up more games not on my wish list.

First up was a much lesser known Super FX chip game on the Super Nintendo called Dirt Trax FX. It’s a dirt bike racing game developed by Sculptured Software and published by Acclaim. Believe it or not I did remember playing this game at the time it was released in late 1995.

Next up is a Game Boy Advance title that you’d be forgiven for thinking it was on the Genesis. Sega teamed up with THQ for this 2002 edition of The Revenge of Shinobi which clearly didn’t go over as well. It was released the same year as the PlayStation 2 version of Shinobi.

Here’s actually a game I did have on my wish list sometime ago. I removed it because I didn’t ever expect to find it. The Game Boy Advance version of Teenage Mutant Ninja Turtles 2: Battle Nexus is more of a 2D stealth game. It seemed to be similar to Splinter Cell’s outing on this same platform (another game I never found and removed from my list).

And finally I picked up an import Japanese Game Boy release of The King of Fighters ’96. This was the same one Usagi704 had received earlier this year.

That do it for this time. Check the photo below and have a good one! 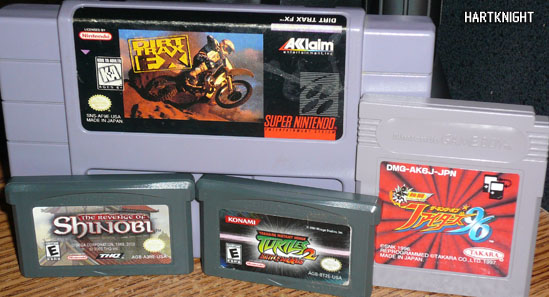 A sudden surprise of an addition to my gaming library was the Game Boy version of Adventure Island. And if you didn’t know it’s actually the second portable game and not the first as it may seem. Thanks to Usagi704, host of Mike at the Movies, for the game.

He’d also bought me the Back to the Future trilogy on Blu-ray as well. It was my birthday recently.

The Terminator, however, was my own purchase after the movie’s one-day rerelease into select theaters. I’d went to see it and it gave me a new appreciation for this movie in a few ways I didn’t expect. One of those ways was for the character of Lieutenant Ed Traxler played by Paul Winfield. His humor was hilarious and Traxler is now my favorite character of the 1984 film.

Thanks for reading and check out the above link to Mike at the Movies and also the podcasts here on this site.

Here’s another set of four new movies. Two more DVD upgrades in The American President and Collateral Damage. The latter was a former Blockbuster rental copy. Oh, Blockbuster. Those where the days. The other two, Whiplash and Gangs of New York, are new to my collection altogether. I was reminded that Gangs was a Martin Scorsese picture so I decided to get it. Whiplash was my newest favorite after my initial viewing. It was the reason I selected it. 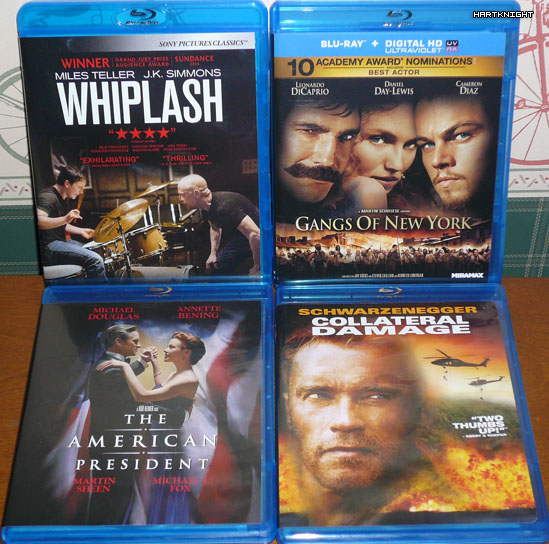 Onto the gaming side. I was with Usagi704 and we visited an out of town gaming store called Warp Zone. After much digging around, because heaven forbid I not be kneeling on the floor, looking through a bin of portable games, I found the Japanese version of Castlevania II: Belmont’s Revenge. The only difference I’m aware of is the subweapon difference of the Axe (NA) being the Cross (JP). I also found NHL Blades of Steel 2000 for the Game Boy Color. I didn’t know Konami ever made another Blades of Steel game after the NES title. I guess this is it. Unlike the original game it has both the NHL and NHL Players licenses. 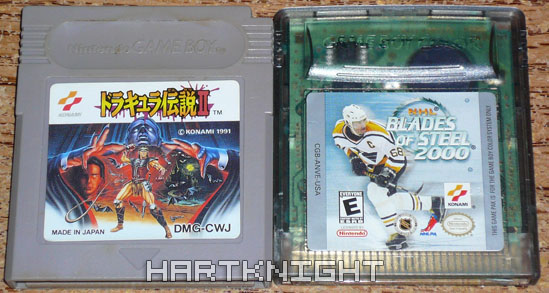 The final three games puchased was the PlayStation 4 version of the rebooted Shadow Warrior. It marks my fifth game for the system I still do not own. I also picked up on a whim the Komplete Edition of Mortal Kombat, which was a used copy without an online pass, and Saints Row: Gat Out of Hell. Both are for the PS3. I don’t plan to play online with MK9 so it’s just as well it didn’t have the pass with it. Gat Out of Hell was labeled a “First Edition.” It’s probably similar to “Day 1 Edition” and it includes DLC called the “Devil’s Workshop Pack.”

Earlier in the month I laid out what I was playing at the time, Omega Boost and Final Fantasy IX. I am still working on the latter, obviously. Click here to read my thoughts on Omega Boost.

I did also play and complete my second game of it year. It was Castlevania II: Belmont’s Revenge on the Game Boy. If you didn’t know, and I can’t see how you wouldn’t, this Castlevania game has the best music of the three on the system. It’s also a very good platformer and considerably better than Castlevania: The Adventure. The subweapons in the game only consist of holy water and the axe. The axe is the best choice in most circumstances.

Back in 1991 when the game was first released I had played it, but I never got far in Dracula’s castle after clearing out the initial four stages. The difficulty ramps up here and especially in the second half. Dracula himself is a difficult final boss because most of the time I found myself dodging his spinning orbs without getting a chance to hit him before I had to get into a safe position again. There was a boss right before him, however, that I never knew about until it was upon me. It’s against Soleiyu and it is also hard to win. You’ll beg to get some distance from him when he’s closing in on you along with daggers flying in your direction.

Thankfully Final Fantasy IX hasn’t been as nerve-wrecking. I’m currently on the second disc at a place called Cleyra which exists inside a sandstorm that they maintain. As far as the characters go Steiner is great at being impatient and he accuses wrongdoing of anyone he looks down upon. A very upper class trait to have. It’s adorable too as none of the other characters pays much attention to his demands. Steiner is sort of the comic relief as he jumps around in anger like a child all while in a full suit of armor. Zidane also likes to call him “Rusty.” Time spent so far on this grand adventure has been just over 14 hours with many more to come.

Thanks for reading and remember there’s a new episode of Space Suplex coming soon talking about WWE Fastlane!

We’re back at you with dose number 45 of the Hart and Usagi Podcast. Off the top I let you know of our new Twitter account for the show. It’s @HartandUsagi! So please do follow for updates and notifications on episode releases.

As for the rest of this episode, Usagi704 and I give our thoughts on various topics. We reminisce about the Game Boy which recently turned 25, Adam Sessler leaving video game coverage for other interests of his, the infamous Atari landfill, and much, much more!

In my attempt to get to the bottom of why I lacked interest in gaming recently, I think it’s time to spend some quality time with my 8-bit and 16-bit systems. If I was madtyger I’d probably have names for them outside of the official ones. :D

As much as I’d like to think I give equal time to all of the game systems I own, past and present, I really know that this is simply not the case. One look at the complete list of games I actually finished last year proves that I rarely play much of the retro library I own.

To rectify this I’ve selected 14 games from an assortment of systems to play. I probably won’t bother with getting to them all, but these titles listed below are the ones which look to be good fun for the time being. If you’d like to suggest one of the games below, I’ll happily make it a priority to get to first (or next).