I’m back. My new PC is up and running “gud” so it’s time to get back to business.

In the coming weeks you’ll get new episodes of both the Hart & Usagi and Space Suplex podcasts. Along with that I’ll also be coming soon with an update on my gaming progress (or lack of it, as the case may be). This update will focus on the purchases I’ve made during the weeks of downtime.

First up is new games!

I picked up Hotline Miami on the PlayStation Network for just $2.00. It gave me versions for the PS3, PS4, and Vita. Of Wolfenstein I got a local copy of The Old Blood. I would’ve had The New Order at the same time, but the case was broken and Best Buy didn’t have an copies to replace it. A new PSP was acquired too. This was a third import of the Kamen Rider Climax Heroes series entitled Kamen Rider Chou Climax Heroes.

I picked up Boyz n the Hood soon after seeing Straight Outta Compton in the theater last year, which I also bought. Both are very good and worth seeing.

Usagi704 improved his collection with a Steelbook of Casino as did I with For Your Eyes Only. I took the older version of the former film off of him for a bargain bin price.

On DVD is how I original saw The Mechanic (1972). It was on one of those very cheap three film sets on one disc deals. I upgraded to a stand-alone Blu-ray for ultimate in picture quality along with extras like my beloved commentary.

Other movies I got were: Tomb Raider: The Cradle of Life, The Legend of Billie Jean, Air Force One, and Samurai Pizza Cats (a 52 episode cartoon show). 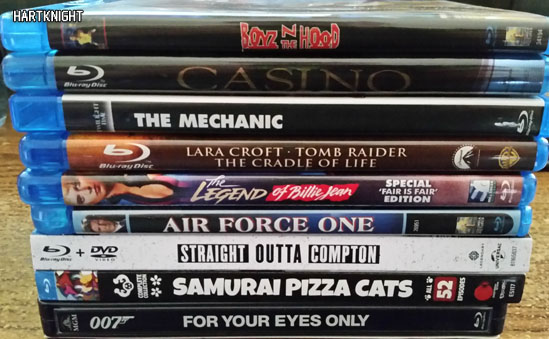 I finished up with The Saboteur a few days ago. It was actually quite the fitting ending to not have a drawn out final battle against the main antagonist. It was a simple climb to the top of the Eiffel Tower and one bullet later it was all over.

After the credits rolled I completed the rest of the targets and didn’t need a FAQ to do so. This is a first for me. Despite 100% on missions and targets I didn’t get every trophy. I missed six along the way, but I did get 87% of the total.

This makes The Saboteur the third game finished for 2014. The previous two being Bayonetta and Brothers: A Tale of Two Sons.

The next set of games I plan on playing are the following:
* Kirby 64: The Crystal Shards
* Batman: Arkham Asylum
* Tatsunoko vs. Capcom: Ultimate All-Stars
* Muramasa: The Demon Blade
* Onimusha: Dawn of Dreams

Finally I recently purchased my first game of the new year. It’s the glitchfest known as Assassin’s Creed III.

I was about to play a game online about a week ago with SonicHomeboy and in a message I joked about how it was my birthday and he should send me something. I wasn’t being serious at all, but last Friday I received a package making the joke all more real. He had sent me a game that was on my wish list. Of all of the titles for the Wii that I wanted, of which there’s only seven, he couldn’t have chosen a better one to get. It was Tatsunoko vs. Capcom: Ultimate All-Stars!

Since my Now Playing blog post I finished the final few stages of Ragnarok mode in Kamen Rider Climax Heroes OOO and unlocking the rest of the characters. This included running through the arcade mode once to unlock Kamen Rider W in Cyclone Accel Xtreme form. I felt this character to be unnecessary since this form of W never happened in the show. It was only an idea of Shroud in a thought bubble.

While over at a friends place earlier in the week I played some of Baseball Stars 2 on SNK Arcade Classics Vol. 1 via my PSP. I’ve always had trouble with pitching to the correct base on games of this era. I hit the throw button while my character is running in the direction of the base, but ball instead goes to the base as corresponds to the d-pad (1st = Right, 2nd = Up, 3rd = Left, Home = Down). It makes sense, but I hardly seem to do it correctly when under pressure to make it before the runner. I lost in extra innings as you probably guessed.

I’ve mainly been playing on the PSP since the visit. I’ve mostly played Gradius Collection and it’s reminded me why I like the series so much. Shoot-’em-ups don’t attract me all that much, but I like these games. I started with Gradius III and can get quite far. I just haven’t been able to finish it yet.

In my first session with the original Gradius, I finished it. It’s overall a much easier game with bosses that are very repetitive and easy. Gradius II, on the other hand, is the most difficult out of the three. I can’t pass stage 2 yet. The collection also has Gradius IV and Gaiden (a PS1 game), but I didn’t want to start them for now.

I plan to start playing GoldenEye: Rogue Agent next. Usagi704 just recently played through it fairly quickly on Xbox. I’ll be breaking out the PS2 version.

For the month of April I managed to finish three more games: Kamen Rider Dragon Knight for DS, Tetris for PS3, and Uncharted 2: Among Thieves. The former two games I talked about here earlier in the month. I also played some of Dragon Knight on Wii with my nephew and Kamen Rider Climax Heroes OOO on PSP which I laid out in this blog post.

The blog post linked to above was also where I first talked about starting Uncharted 2: Among Thieves. Since then I’ve played the rest of the way through it. See the full list of my finished games for 2011 here.

I’m not sure if it’s just me, but the pace of Uncharted 2 felt a bit quicker than that of the previous game. I enjoyed both games, but this one was enough improved to where I do like it better.

Being a connoisseur of Nathan Drake’s kind of humor, I particularly liked his character and his interactions with Harry Flynn. My favorite quote of the whole game was in Chapter 24: The Road to Shambhala where Drake says to Flynn “You, asswipe. Gimme your lighter.”

I wasn’t much of a fan of the few stealth sequences from early on in the game where being seen required to restart the area. As long as I could shoot it out with the enemies left it wasn’t bad at all later on.

UNCHARTED 2: AMONG THIEVES
I just recently started playing Uncharted 2. I had it on my scheduled to play list on my Backloggery page ever since the date for the third game was announced.

I love the much improved grenade throwing over the Sixaxis way from the first game. Otherwise, it feels like slipping into a pair of old comfortable shoes. My current progress is 25% complete at 2 hours and 28 minutes with 7 treasures found.

A LION’S TALE
Something I finished this last week surprisingly isn’t a game. Chris Jericho’s first book, A Lion’s Tale, was quite entertaining to read. I especially enjoyed reading about his time wrestling in Japan and WCW.

I’d probably like it about as much as Mick Foley’s first book, Have A Nice Day, if it didn’t have a number of grammar errors. At least it wasn’t anywhere near as bad as Controversy Creates Cash, the horrible book by Eric Bischoff. That one was rife with grammar and spelling errors.

KAMEN RIDER (PSP & WII)
Back to gaming. On my PSP I’ve been playing the Ragnarok mode in Kamen Rider Climax Heroes OOO which helps to unlock other characters to play as. My favorite Riders to play as so far have been Kiva in Emperor form, W in FangJoker form, and PunchHopper.

Last Sunday on the Wii I popped Kamen Rider Dragon Knight back in for the first time since last June and played against my nephew. He was surprisingly a good sport despite losing every match. I had a small amount of trouble whenever he chose Incisor or Survive Mode Wing Knight unless I had Wrath. He’s a beast and helped me get a perfect every time I used him.

That’s it for now. Thanks for stopping by!

Here’s a few new games I picked up in the last couple of days.

Tetris
Tetris is by far my favorite puzzle game and this new PlayStation 3 version from EA blows away the last one I played which was Tetris DS. The latter one had too much of a Nintendo theme to it and most of the extra modes weren’t very good.

In contrast this new version’s theme is simply Tetris. You know, the way it should be. Time will tell if the extra modes are just a novelty or something which can hold my interest. Regardless, the original mode is always one I can go back to time and time again. Plus it’s online for, I think, up to 10 players!

Super Hang-On
Despite the warnings of SonicHomeboy, I got the Genesis version of Super Hang-On. It doesn’t seem all that bad, but then again I’ve only tested it. I also never played much of the game in the first place to know. At least the video I found to link to is really good. :D

Kamen Rider Climax Heroes OOO
Another import game. It’s my second order from NCSX and I can confirm they’re awesome. It did take awhile to arrive, but I knew this going into it.

Also available on Wii, Kamen Rider Climax Heroes OOO for PSP was the import friendly way to go. It’s the closest gameplay-wise to Kamen Rider Dragon Knight just with more differences between the characters and their abilities. It includes a majority of the Riders from the last 12 seasons. Some I’m familar with (Ryuki/Dragon Knight, Kabuto) and others I’m not (Blade, OOO).