Since my Super Nintendo King of Dragons purchase in September, I ended up getting Street Fighter V: Arcade Edition in that time. I plan on likely buying the season 3 pack of DLC just to get G. After all, when the power of Gaia commands, you must obey.

I don’t buy much wrestling on media these days, but after watching an okay Hell In A Cell show, I had to have a way to easily watch that show’s Raw Tag Team Championship match of Dolph Ziggler and Drew McIntyre vs. Dean Ambrose and Seth Rollins. It was an amazing 24 minute match with one of the best finishes I’ve seen in a long time. I also added NXT: Best of 2017. It’s not actually full of the “best of” because of the inclusion of non-match segments and a number of good, but not great matches. Overall, however, it’s worth it for what it is.

I loved the Avatar: The Last Airbender series when I originally saw it. I never did get any of the DVDs because I was always questioning why it wasn’t on Blu-ray for higher quality video. Well, now it is and here it is. 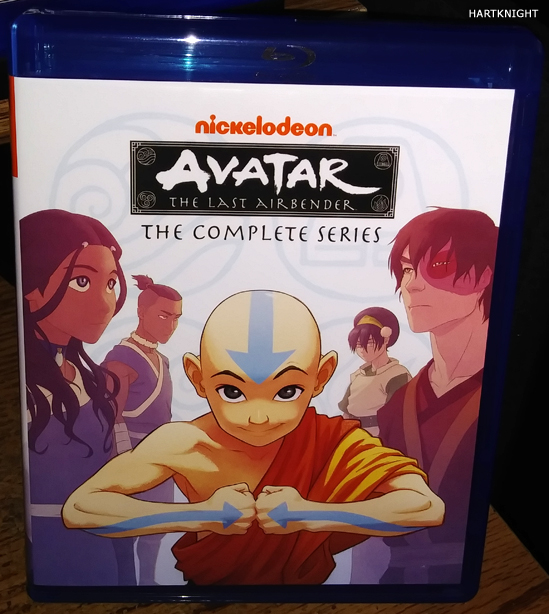 First off welcome to the new URL home of HartKnight’s Archive (hartarchive.wordpress.com). This is where you’ll find all of the blog content that I, HartKnight, write and it’s also where you’ll find every episode of the Hart & Usagi Podcast and Space Suplex podcast.

If you haven’t already please use this RSS feed to subscribe to both the blog content and either podcast. For the iTunes podcast experience please subscribe here.

Now onto the topic at hand.

I found another two Blu-ray movies to add to the collection. First is That Thing You Do from 1996. This 2013 release has theatrical version of the film along with another version called the “Tom Hanks Extended Cut.” That’s a hilarious name for “Director’s Cut” that I’ve ever read.

I’ve never seen much use for additional scenes being added into the original version of any movie. You’d think it’s to make it better in some way, but usually it’s a meaningless time waster that doesn’t add anything significant. I didn’t notice what the extra scenes were in Rambo 4. However, it was noticeable in The Patriot, but they didn’t add anything.

Thankfully, That Thing You Do does have both options for viewing. The Patriot and Rambo 4 did not include their theatrical versions.

The same can be said for Avatar. It does include the theatrical version along with the Special Edition rerelease and a newer 3-hour version. At 2 hours and 42 minutes originally, I will likely not get much use out of the longer cuts. I already complain a lot about most movies being 2 hours long. I don’t want much to do with anything 3 hours or more. Rarely is the length of time actually put to good use.

The packaging of Avatar is nice looking, but the standard Blu-ray case would’ve been fine even with 3 discs. I know because the Bronson Triple Threat Collection was 3 discs and it fit. Also, getting into it to get a disc out is troublesome to say the least. The third photo below can been enlarged with a click on it. That picture says it all.

Thanks for reading and visiting! 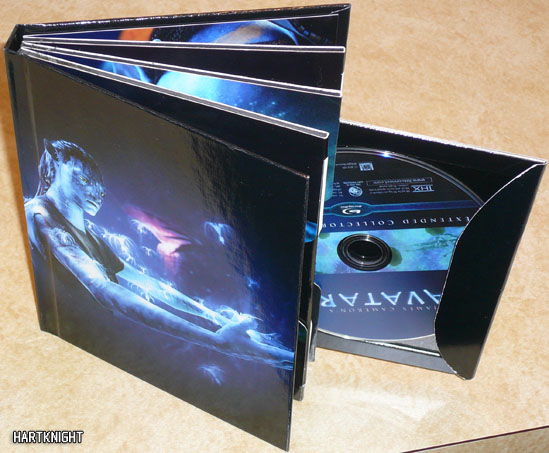 I recently bought a few more of the games on my wish list. These were purchased from eStarland.com. After doing so I linked to said wish list and asked on Twitter if anybody could try and guess the three retail titles. Several folks tried, but all ultimately failed. The main reason for this, as I expected and was confirmed, was that none of them wanted to actually believe I’d really buy Avatar: The Game.

Well, as you’ll see below I did exactly that. In fact, most had trouble guessing anything other than the big budget, high priced items on my wish list. Here’s the list of titles and number of times guessed.

This was all good fun. Now if you’ll excuse me, I have more gaming awaiting me.

We’re now past the holiday release rush season, if the scant few titles below for the next two weeks are any indication.

My pick is The Saboteur. It seems like a pretty cool take on World War II that even includes the use of Zeppelins despite that in reality they weren’t used in the war.

The Sega CD came out to play for the second day of Retro Revival Week with Final Fight CD. I was looking to finish this game, but after two tries on Normal and Easy I figured I’d move onto something else.

With all of the talk at E3 of exclusives, that something else was the Sega CD version’s Time Attack mode. I didn’t fair too well, but I did try the mode back-to-back with both Cody and Guy. I was able to get the beat-’em-up action on film for you all to see.

I hope you enjoyed the video and make sure to check out these other wonderful RRW participants above. Have a fun Day 3! I know I will with RayStorm. Retro rules!

I was on twitter during most of the conference throwing out my thoughts. Here’s a straight copy and paste of what I had said. Mind the language if that’s not your thing.

* Ubisoft conf. begins. TMNT: Smash-Up and Avatar from the intro got cheers.

* Joel McHale opens with jokes that fall completely flat and are Championshit!

Avatar
* I love some of your films, James Cameron, but you aren’t impressing anyone. They’re thinking; “Just show the game already!”

* Just in case anybody is confused. Avatar is not the same as Avatar: The Last Airbender. I was confused at one point too.

Red Steel 2
* Swing it as if it was a sword? Geez thanks for that. I would’ve never figured that out. Ubisoft must think we’re all idiots.

Academy of Champions
* Pelé? Who? Doesn’t need an introduction my ass.

* If I didn’t look up this guy, I wouldn’t have known the game name. They finally mentioned it. Academy of Champions.

* Splinter Cell got the biggest pop so far.

Tween Games 2.0 and Imagine series
* Casual gaming part has started. Guaranteed to be full of suck.

* The only thing I’m Imagining right now is my boredom. Oh wait I don’t need to imagine it since it’s happening now.

Rabbids Go Home
* Inflating parts of the Rabbids only makes the weird things even more so.

The number of good choices for this upcoming week and the next are about the same as the previous two weeks. There’s not much overall, but a high percent of people will be choosing one of the few big games.

As for my picks, I’ll be going with Infamous and Red Faction: Guerrilla. The odd game out of the group is Knights in the Nightmare. It looks quite confusing for me to wrap my head around the original style of the game. Check out this preview over on GT to get a better understanding for the game than I could possibly do myself.

These last three games are what I like to call the “Capcom Medieval Trilogy.” They were all released into the arcades within a 2 year period and are roughly the same type of game. Also the only home ports of these games were on the Super Nintendo until the Capcom collections were released. All three are available on Volume 2 with Magic Sword also on Remixed and the latter two on Reloaded for PSP.

Enjoy the long weekend. Game on!

I’m going to start off with my Game of the Month this time. It was the short, but oh-so-sweet God of War: Chains of Olympus. It only took me about 2-3 days to complete, but it’s still worth buying if you’re a fan of the series (as I am). As much as I like this game, I can’t recommend it even at $30 because of how short it is. However, at $20 or less it’s a better value.

Another great PSP game that should be played if you’ve ever liked shoot-’em-ups is Space Invaders Extreme. It’s fairly difficult, but, at the same time, “extremely” fun to play. Taito did an excellent job at reimaging this classic game with boss fights, bonus rounds, power ups, and different types of invaders to fight. $20 is the perfect price for this brand new game. :)

On July 10th, Burnout Paradise received the Cagney update which added more online challenges, new game modes, custom soundtracks, and more. I’d play this game anyway so it’s not surprising that I was excited about this update.

I also played a number of other games which included: Taito Memories 2 Vol. 2, Pinball Hall of Fame – The Williams Collection, Avatar: The Last Airbender, and Capcom Classics Collection Remixed.

Kill Switch was a game that I’ve been hearing about from Usagi704 for some time and he was all about saying how good it was. I remember the PC demo from years ago and I didn’t really care for it. However, once I started playing the game on the PS2, it actually was pretty good. I won’t be writing home about the experience, but it still a solid shooter with a really good cover system. The story, though, doesn’t make any sense to me. I guess that’s well enough that I’m not continuing to play this game for that.

See you next time on Now Playing!